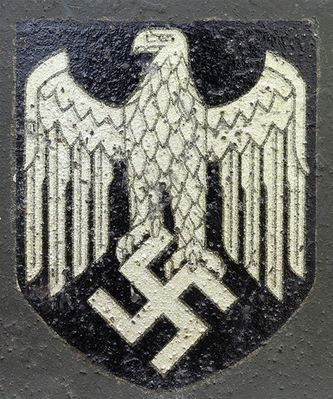 After the political takeover of Germany by the Nazi party, German helmets were issued with a new type of insignia; a decal with an eagle which was the old symbol of Imperial power and the swastika which was the symbol of the new power, the NSDAP (National Socialist German Labour Party) led by Adolf Hitler. The insignia were water transfer decals that were coated in lacquer for better adhesion to the helmet surface.

The different Wehrmacht service branches adopted different designs. The Army (Heer) used an eagle clutching a swastika. The eagle/swastika was silver on a black background in the shape of a shield. The Navy (Kriegsmarine) used a gold color eagle/swastika on a black shield. The Air Force (Luftwaffe) used a flying eagle clutching a swastika with one foot. The SS used silver-colored sigrunen on a black shield and the Police (Polizei)  a smaller silver-colored eagle standing on a swastika surrounded by an oak leaf wreath on a black shield. Smaller branches such as RAD, NSKK and political/civil agencies had their own insignia designs.

This website will highlight decals for the most common branches; Heer, Luftwaffe, Kriegsmarine, SS and Polizei.

I will begin with the decals utilized by the most prominent helmet manufacturer, ET (Eisenhüttenwerke in Thale) and will point out a number of minor variations. While we don’t know the actual identity of this decal manufacturer, the authors of the book, "The Helmet Decals of the Third Reich" (Ken Niewiarowicz with Anders Lehrman) and collectors world-wide denote these decals as "ET style" decals. All ET decals presented on this page are found on ET and CKL/ckl helmets.

Of the 11 ET decals presented here we can see 3 different designs repeat themselves. Note the head shape, the lines in the wings/feathers and the talons. 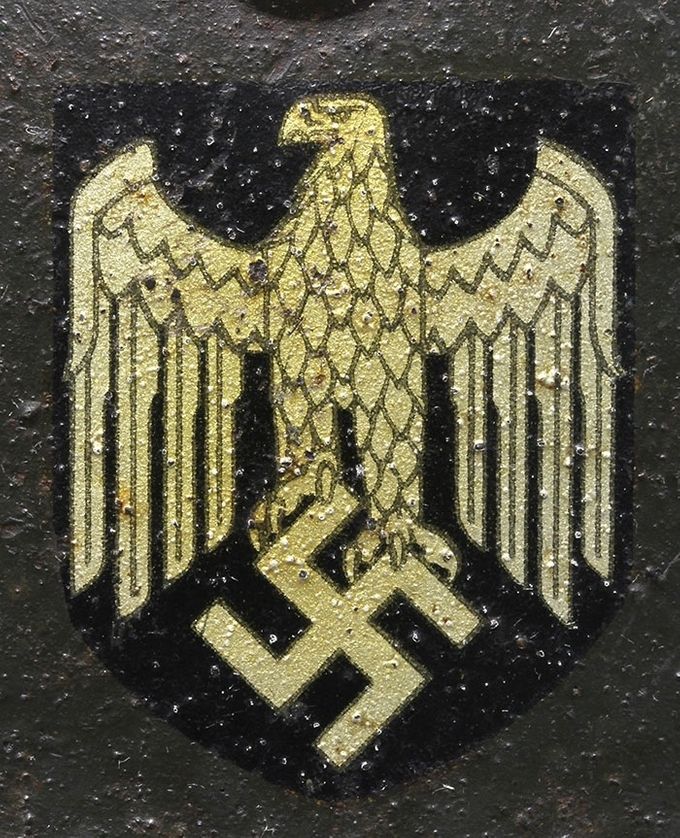 ET decal from an M40. According to the book of Ken Niewiarowicz with Anders Lehrman ("The Helmet Decals of the Third Reich" - 2016) this is the most common ET style decal. 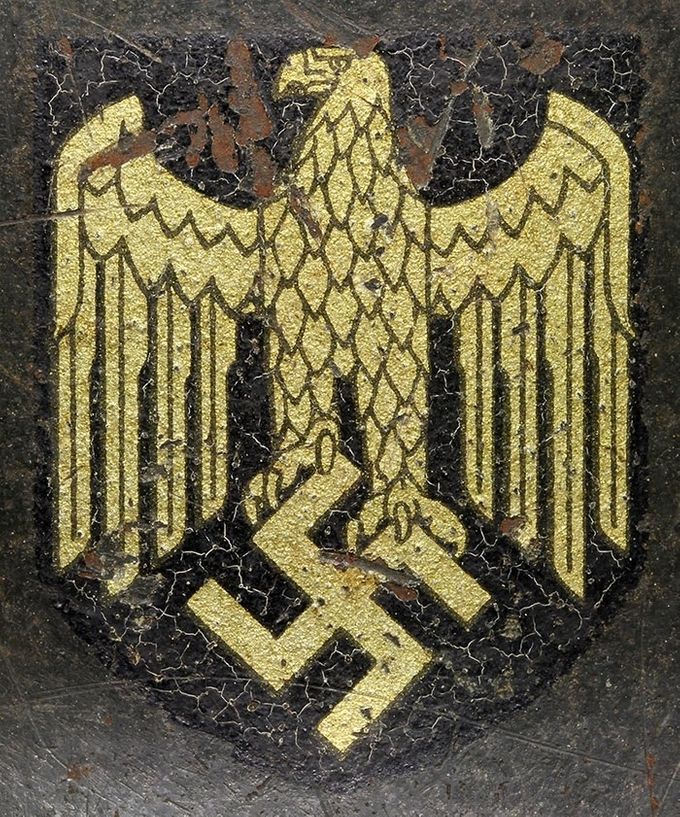 ET decal from an M40. Note the golden color which is caused by the added lacquer yellowing from age. The black background exhibits heavy cracking. 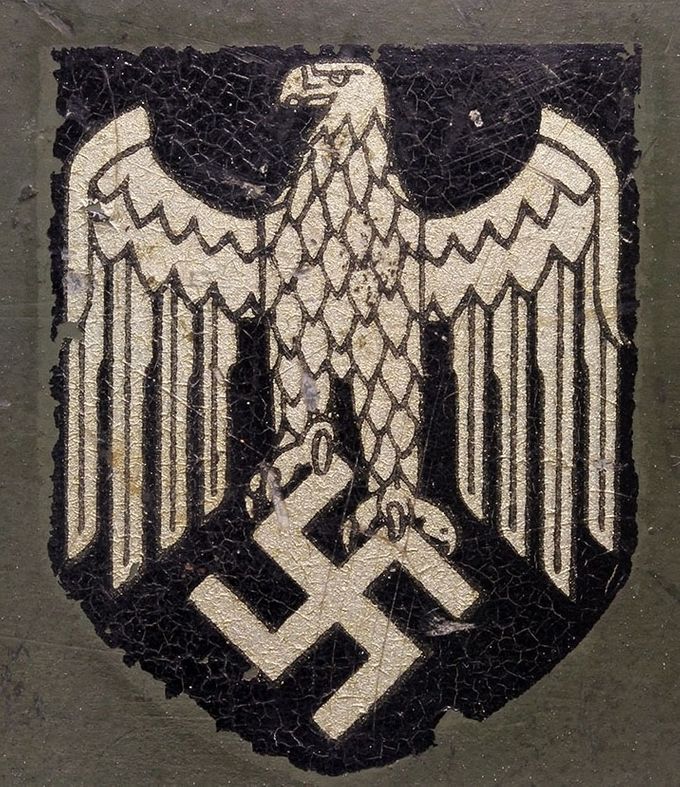 ET decal from an M35. Right foot has a slightly different design than the decals presented above. Note the significant «dimple» in the far right talon. Here can we see significant cracking in the black background similar to the decal shown above. 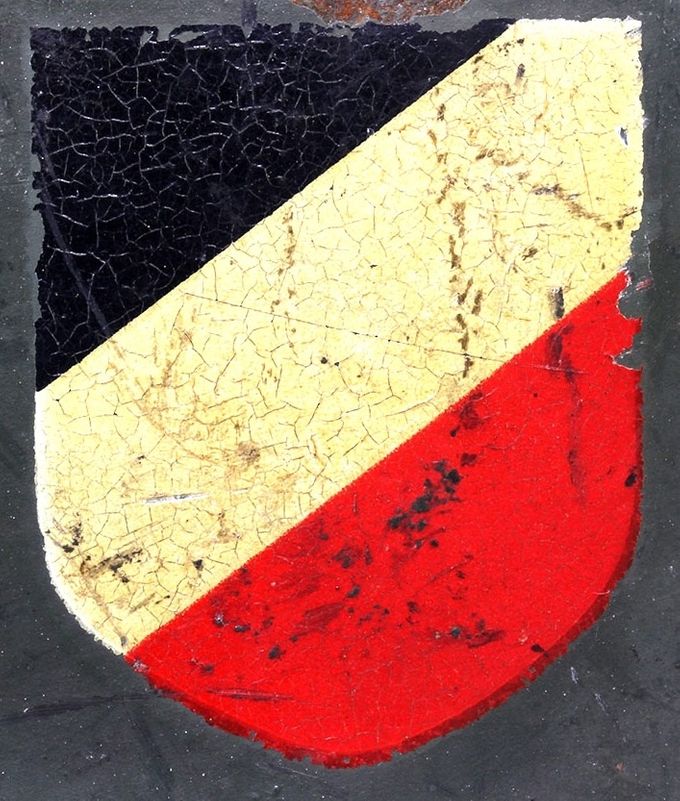 National shield or tricolor on the same M35 ET in the picture above. Notice the cracking in the decal. 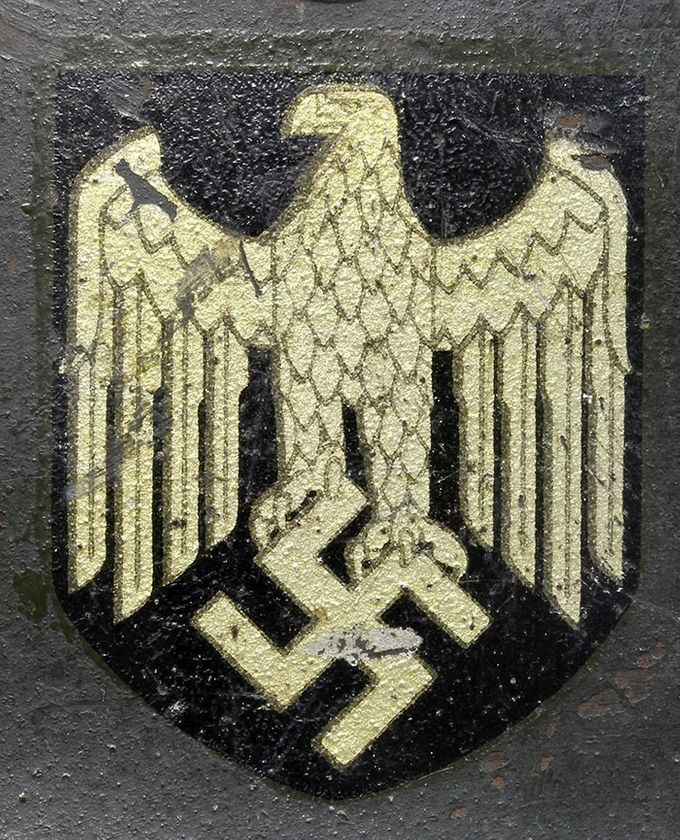 ET decal from an M40. Note the light lines in the eagle’s design. This is probably due to a production error or wear. Note the lacquer around the edge of the decal. This lacquer often turns the eagle yellow over time. 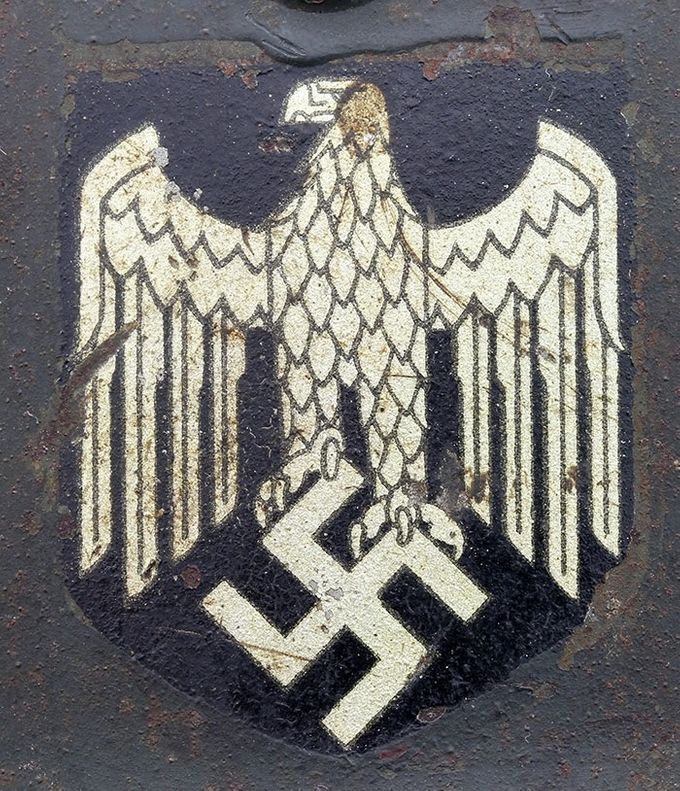 ET decal from an M35 reissue. This M35 received new paint and the decal was painted around. 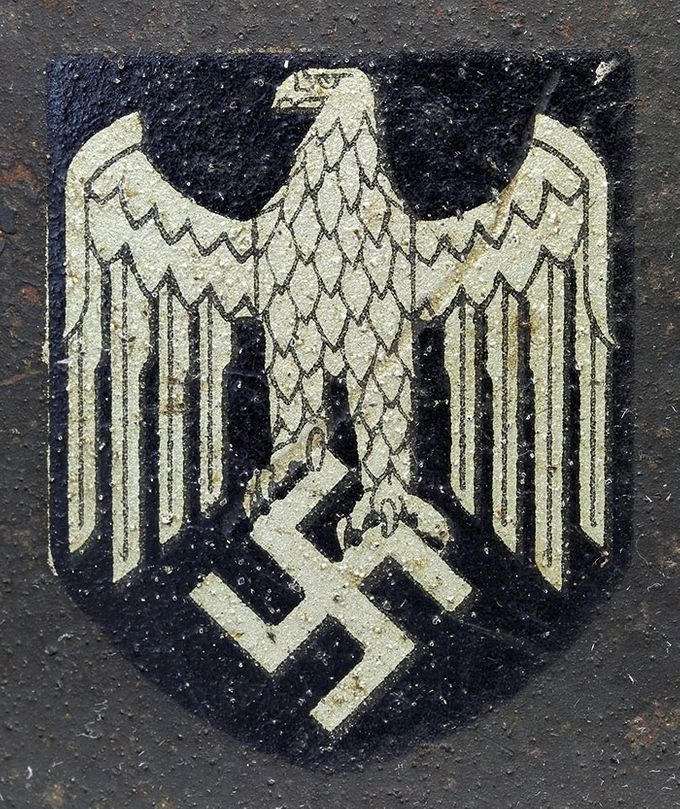 ET decal from an M42. Note the backing of the decal (visible on the left edge) that has the same silver color as the eagle itself. 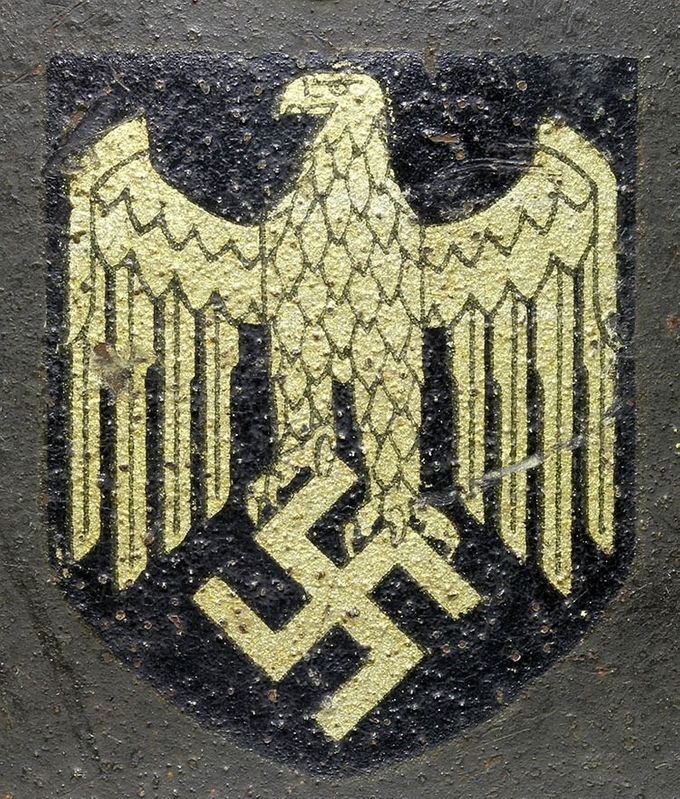 ET decal from an M42. The same design as the decal above. This one has turned more yellow over time. 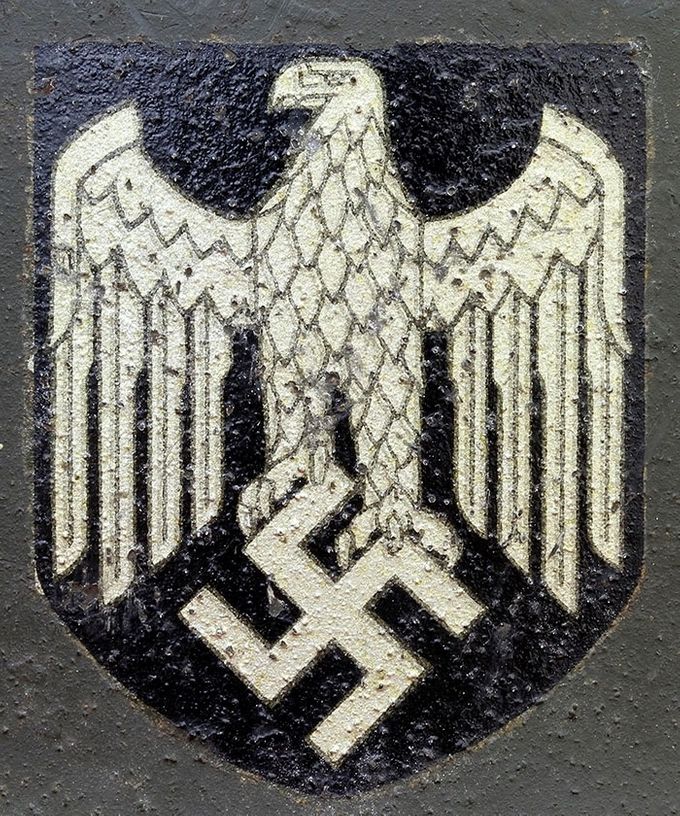 ET decal from an M42. The same design as the first ET decal presented which is the most common ET style. 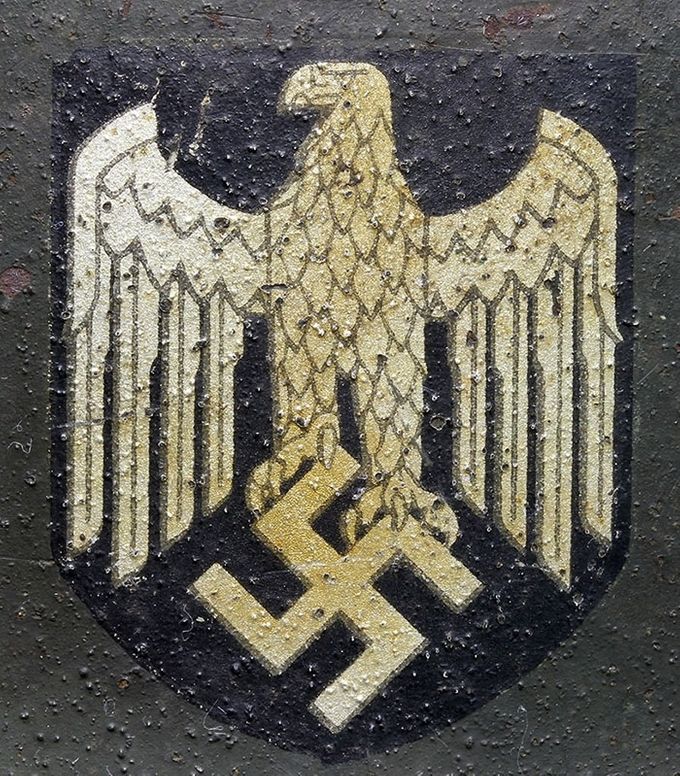 ET decal from an M40. The same design as the decal above. 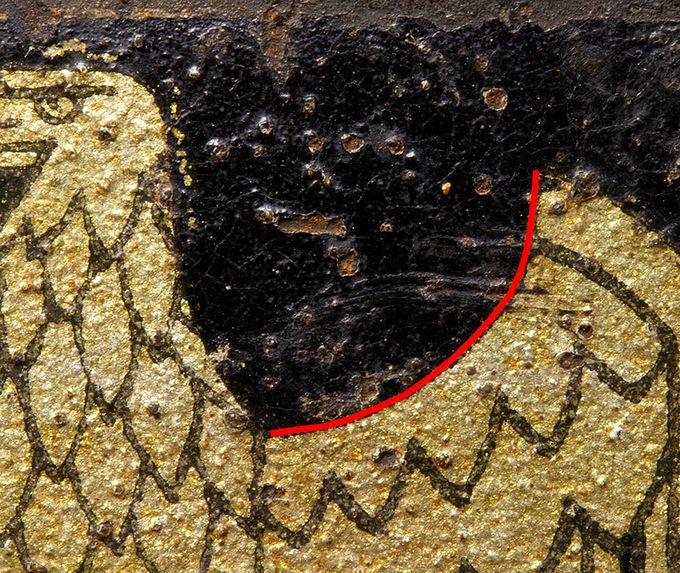 The picture above shows the right wing arch on an ET style decal. The wing arch shows a uniform arc from wing attachment to the upper part of the arch (see red line). This detail is the most distinctive on all ET style decals. 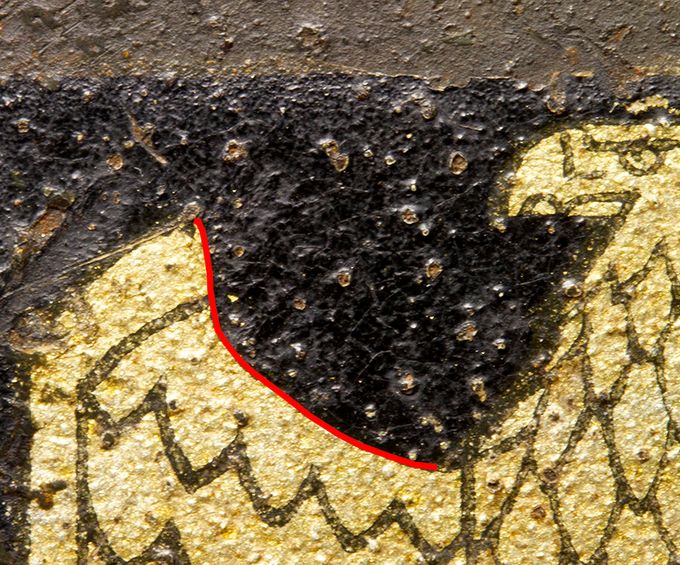 The picture above shows the left wing arches on an ET style decal. Notice the marked bend at the very top of the wing arch. This detail together with the uniform arc on the right wing arch are the most distinctive detail on all ET style decals. 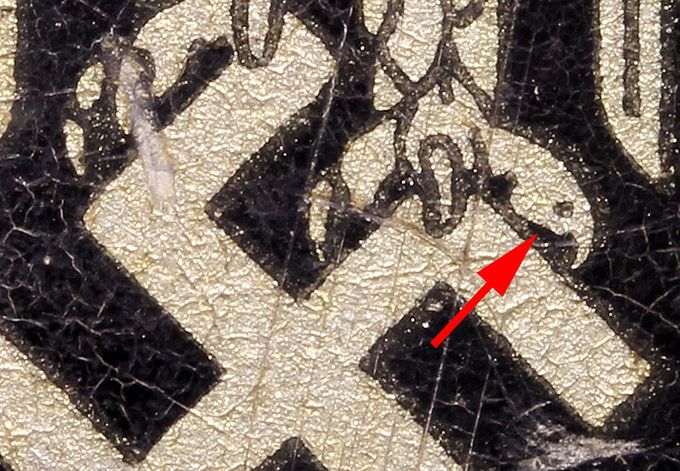 The picture above shows a dot on the right claw on the right foot. This detail is present on many ET style decals on M35, M40 and M42 helmets.