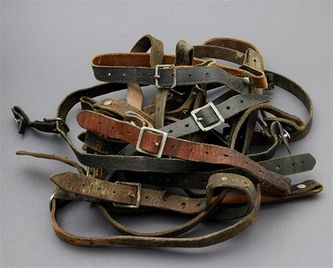 The chinstrap consists of a long end which measures 36-40 cm and a short end that is approximately 5 cm. The long end has 13 circular or oval shaped holes for the buckle prong. The short end has a metal buckle where the chinstrap can be adjusted. Both ends are secured to the bales (D-rings) on each side of the liner with retaining studs.

The tip of the long end is normally stamped with the manufacturer’s name, location and year of production. These markings are often illegible due to wear and/or faint stampings. It was also common for soldiers to shorten the long end by cutting off the tip.

There are several variations in color, thickness, materials and buckle design. With some exceptions, the Luftwaffe used brown colored leather while the other military branches used black. However by 1940 all branches utilized straps of both colors. Early chinstraps were manufactured with aluminum buckles and retaining studs. As the war progressed, chinstraps were fitted with painted or unpainted brushed steel buckles.

The rear chinstrap is an early example (dated 1938) with brown leather and aluminum buckle. The chinstrap in front (dated 1941) has black colored leather and a painted steel buckle. Notice the wear on the middle part of the early chinstrap. Several years of hard use has resulted in a narrowing of the leather, sweat stains and stress damage. 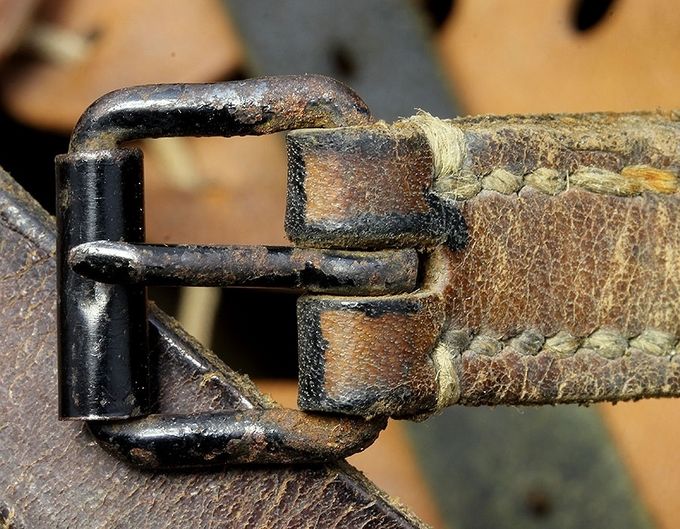 This is an early style, black painted roller buckle that is sometimes found on M35 helmets and WW1 reissues. 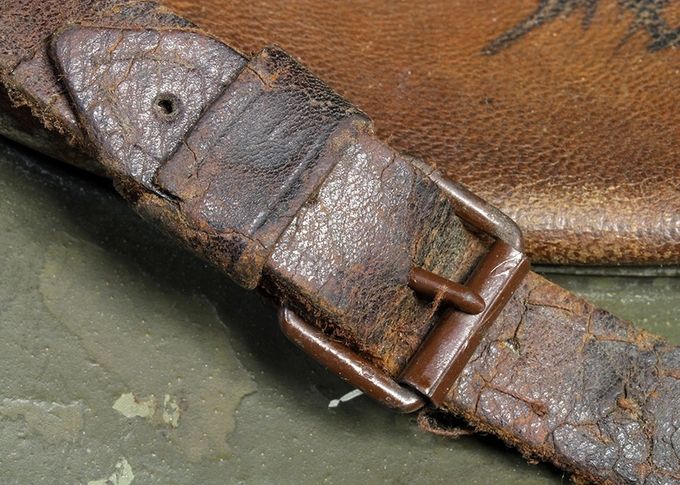 A brown painted early roller buckle on an M18 transitional. 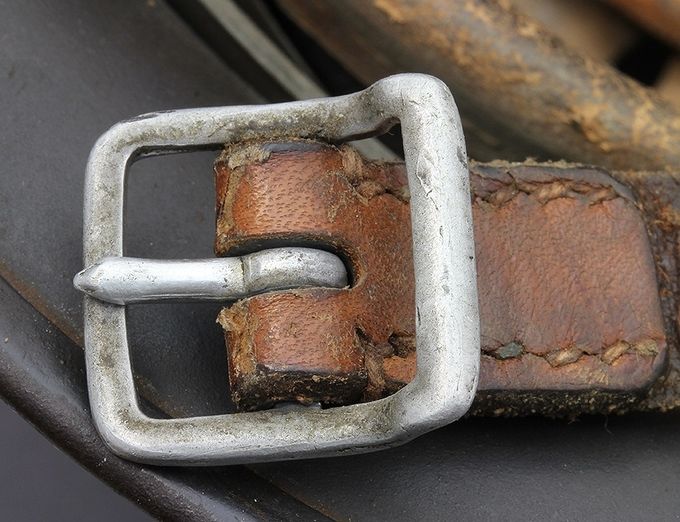 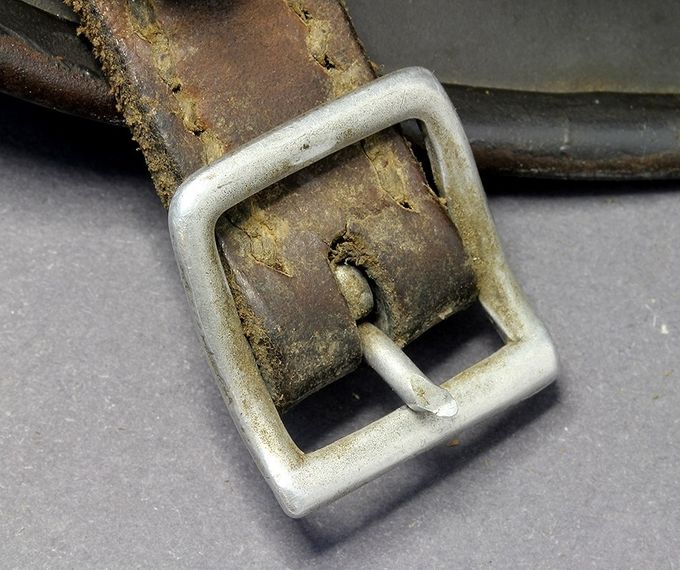 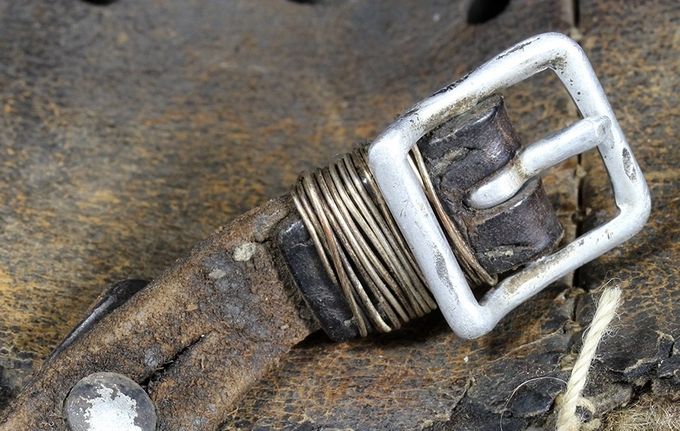 An aluminum buckle with a field repair. 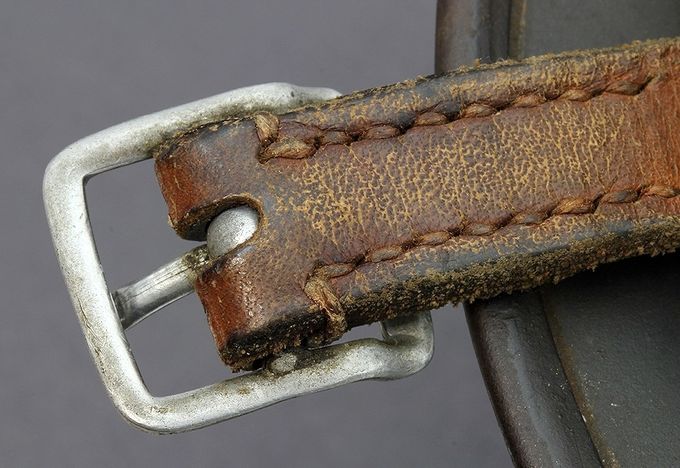 Reverse side of a chinstrap short end with aluminum buckle on an M35. Notice the parallel seams, each with eight stiches. 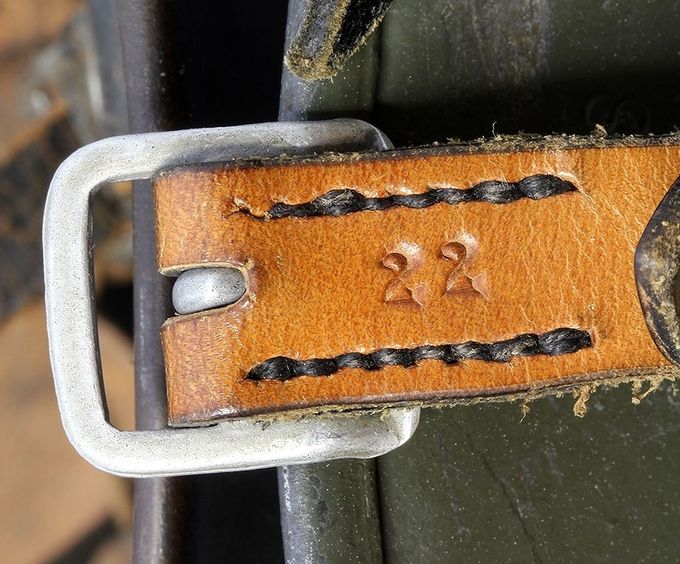 Reverse side of a chinstrap short end with aluminum buckle on an M35. Notice the number 22 and the parallel seams. This type of stitching is different from that shown in the picture above. 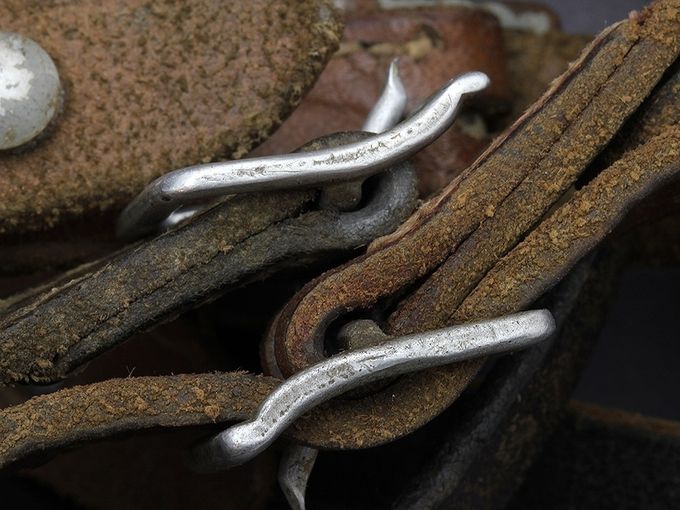 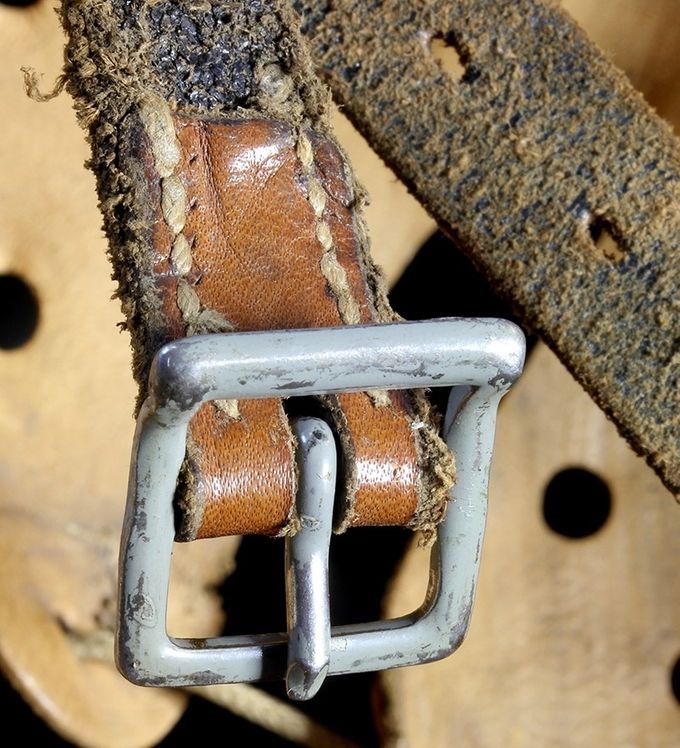 Steel buckle painted in blue-grey on an M40. Steel buckles without paint exist, but this is often due to heavy wear and age resulting in paint loss. Notice the oval buckle prong holes on the long end. 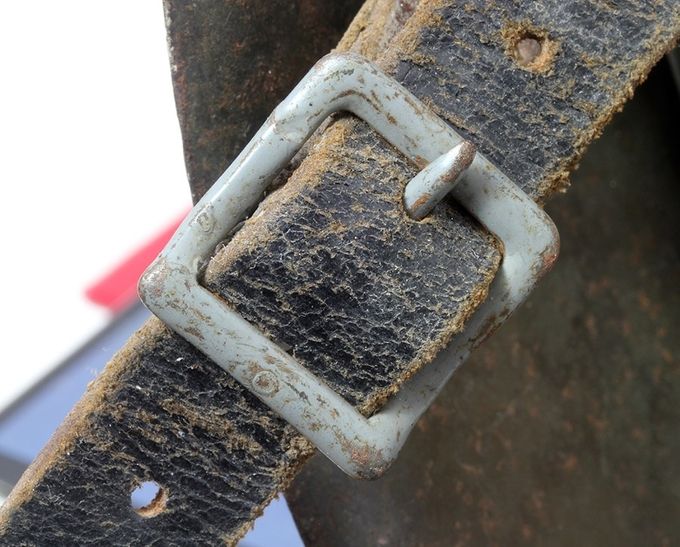 Painted steel buckle on an M40. This chinstrap is dyed black and the holes for the buckle prong are circular. 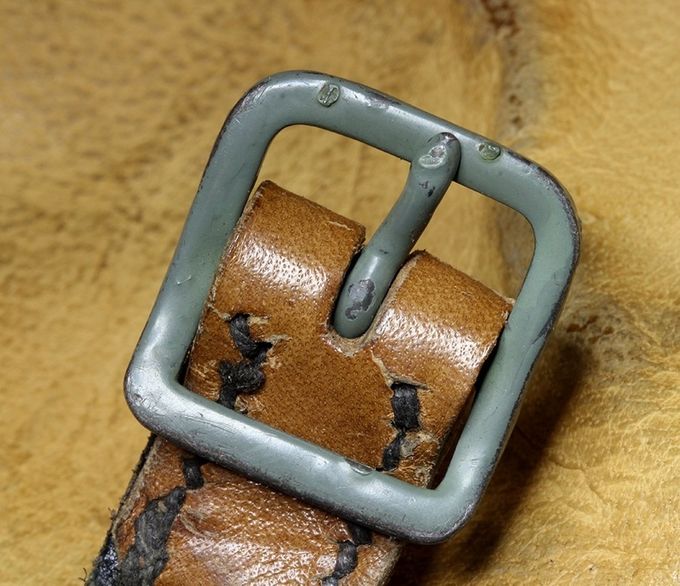 Painted steel buckle on an M35 reissue. The color is more grey than the previous steel buckles shown above. 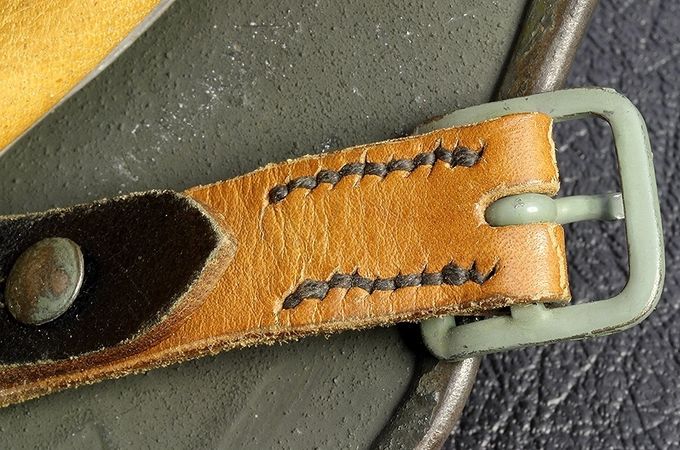 The reverse side of a grey painted steel buckle on an M35 reissue. This helmet was painted with a rough sand paint both outside and inside (the inner dome as well), and fitted with a new liner and a new chinstrap. 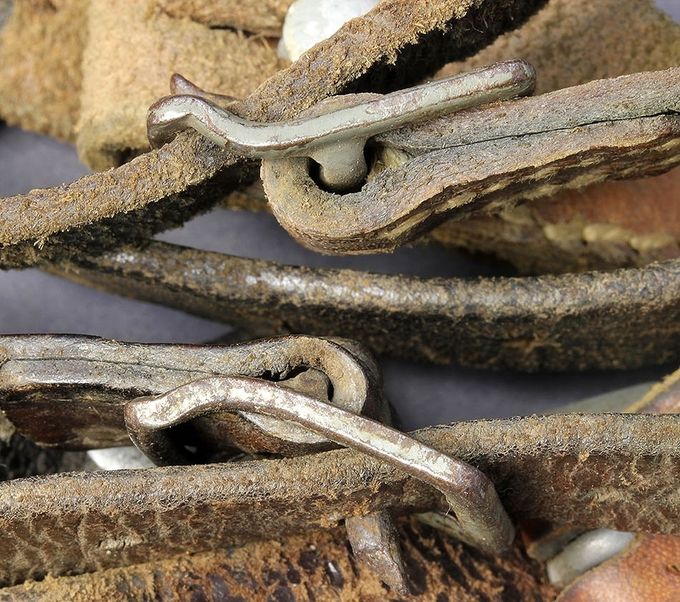 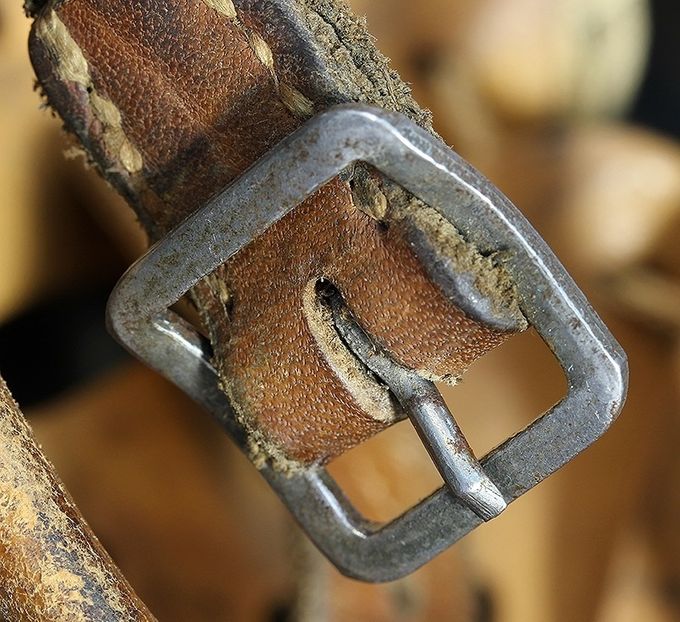 A buckle in brushed steel (not painted) on an M40 reissue. These are common on mid-war and late war helmets. 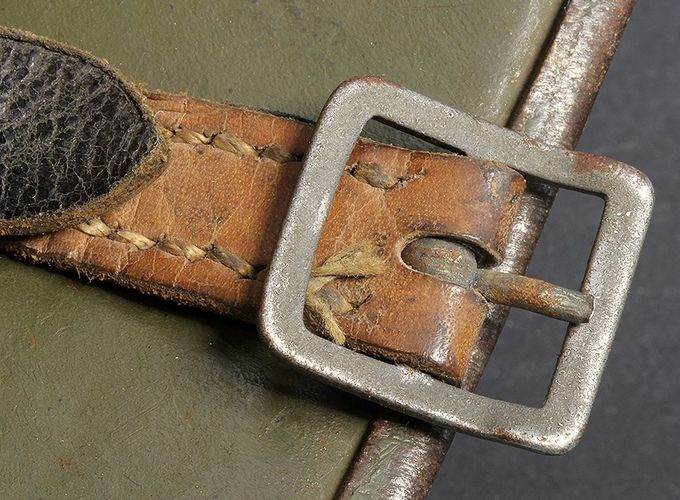 Brushed steel buckle on an M40. 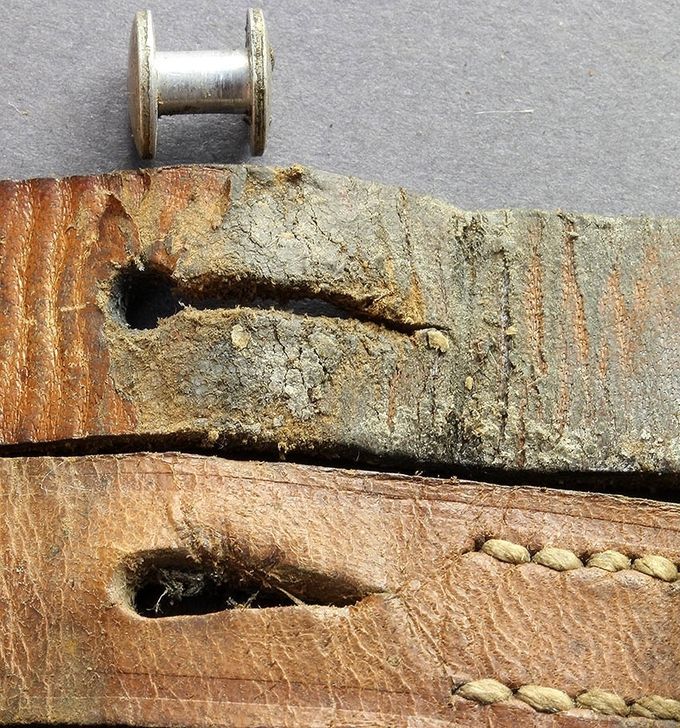 An aluminum stud and two different insertion hole designs. The lower example has a pear-shaped hole which is the most common. Notice the verdigris in the leather on the upper example. 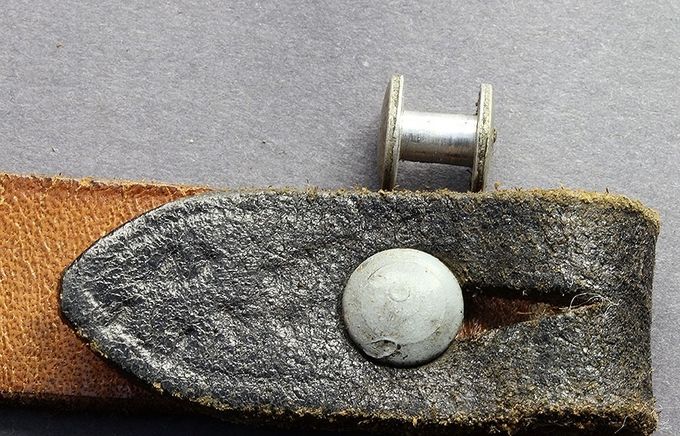 An aluminum retaining stud (above) and a zinc-coated steel stud (below). 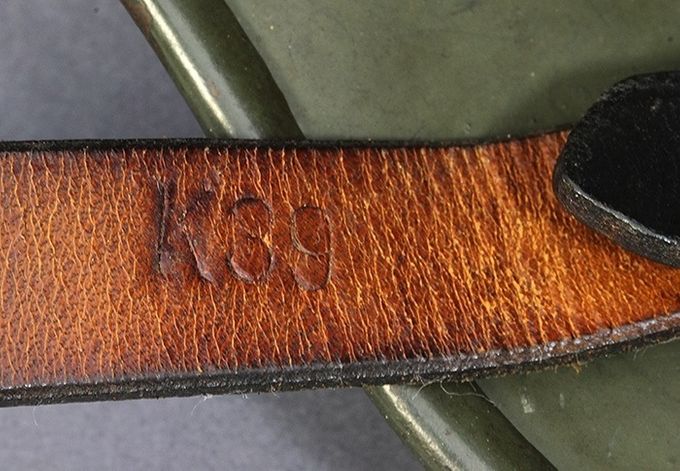 K39 stamp on the long part of the chinstrap near the retaining stud.