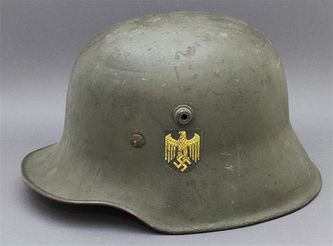 When the German Wehrmacht began to rebuild in the 1930s, they procured whatever helmets were available.This included depot stocks of WWI M16, M17 and M18 helmets. These helmets are referred by collectors as «transtionals». Early transitionals retained their original WW1 paint, liners and chinstraps but were fitted with TR (Third Reich) decals. Subsequently the helmets were upgraded with smooth paint (the same field gray found on the M35), M31 liners, modern chinstraps and a set of decals; these are referred as classic transitionals. As the war progressed and the manufacturing demand for helmets increased, German forces in occupation or garrison duties were often equipped with remaining stocks of WWI helmets or WWI transitionals. These helmets were reissued with textured paint, M31 liners, modern chinstraps and a decal on the left side only.

Many period photos from the invasion of Norway in April 1940 show German soldiers wearing transitionals. Those transitionals that remained in Norway during the occupation received new paint and a new look by the units using them. The author has found a great variety of transitionals in Norway and they are more common than rare. 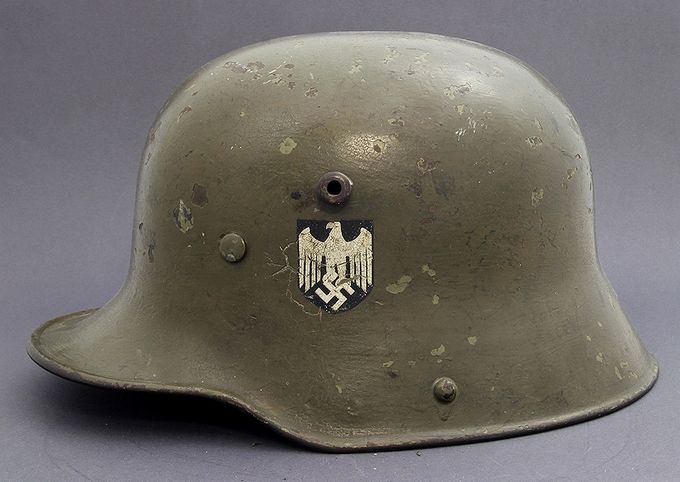 M16/M17 with smooth green paint and a typical transtional decal. Under the Heer decal there is a Weimar decal. 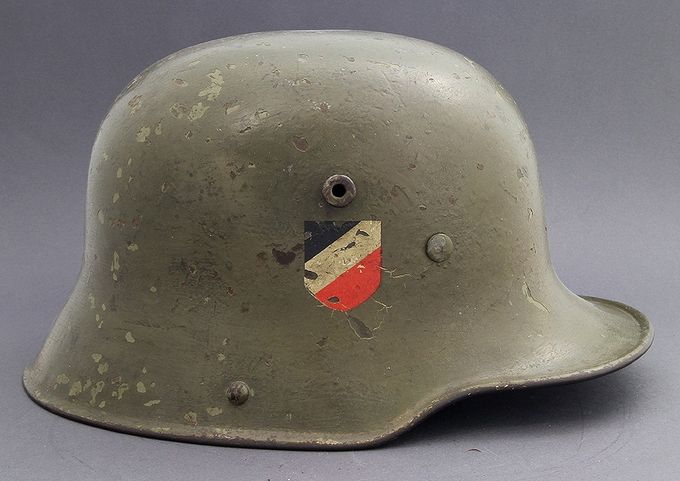 The right side of the M16/M17 above. Notice the slightly smaller national shield compared with national shields on M35s. Visible beneath the cracking is a Weimar decal. 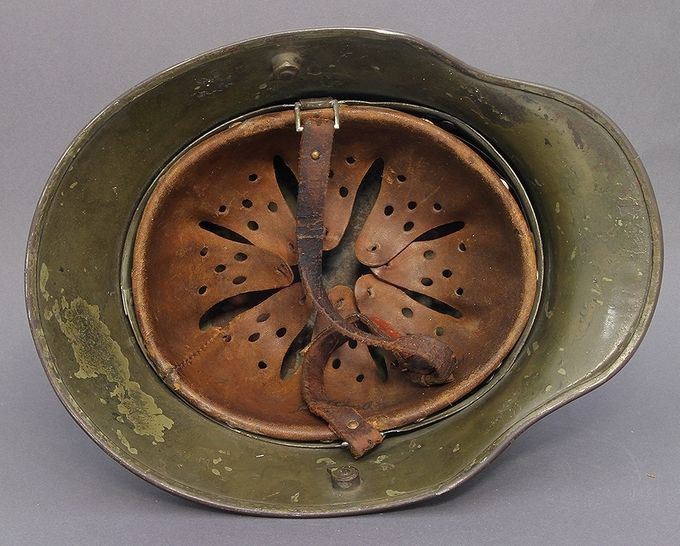 The liner of the M16/M17 above. Early M31 liner with embossed maker stamp and early roller buckle chinstrap. 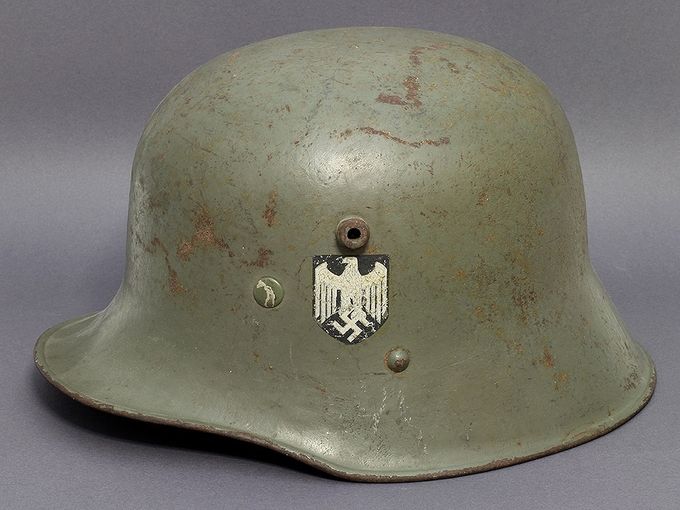 M17 Austrian-manufactured helmet. Notice the high position of the chinstrap lug just below the right side of the decal. This decal is an early type with faded lines in the eagle. The paint is an early smooth type (Lars Aasen collection). 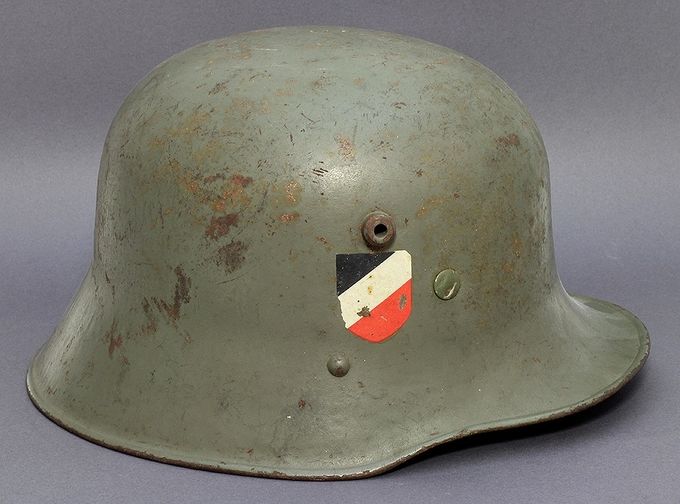 The right side of the Austrian M17 above. 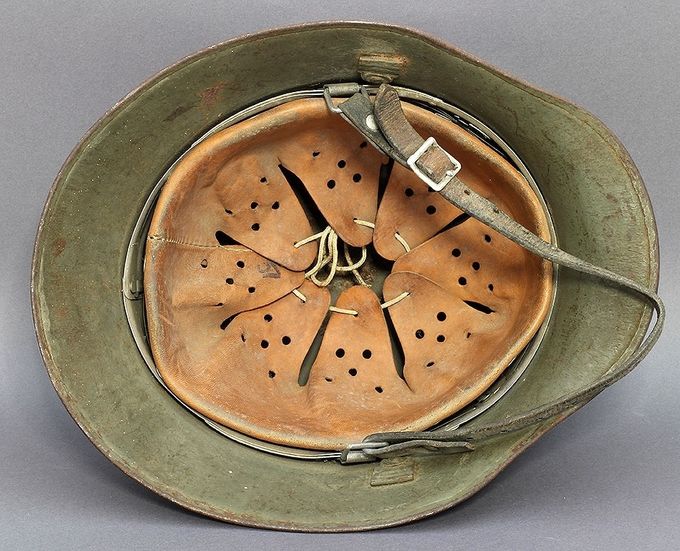 The liner of the M17 above. 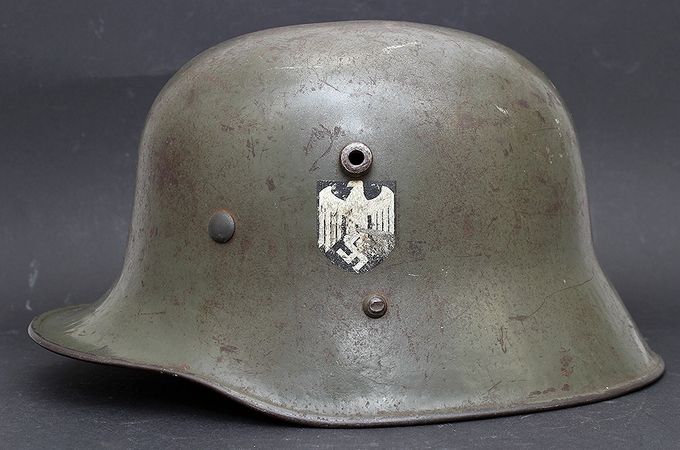 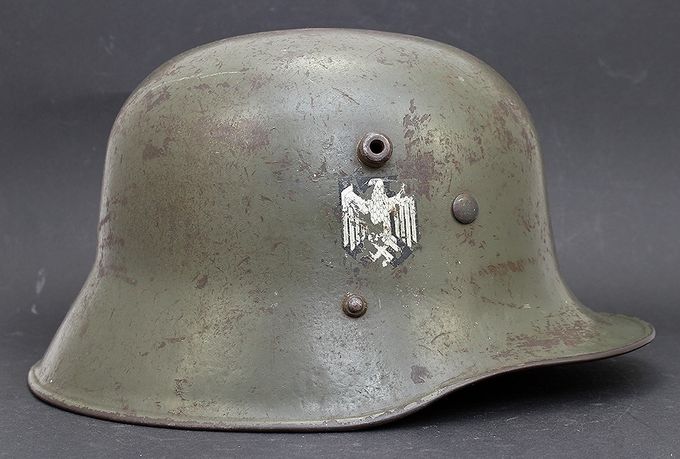 The right side of the helmet above. An ET style decal has been placed where the national shield should have been. Notice the placement of the rivet and the vent "horn”. Both were stamped too high and to close too the front compared to the left side. A manufacturer flaw which is seen sometimes in WWI and WW2 helmets. 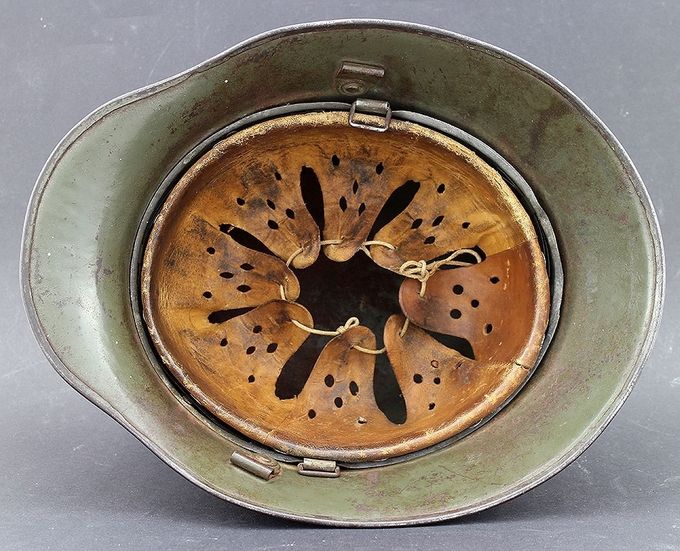 The liner of the M17 Austrian above. Notice the repair to the leather. 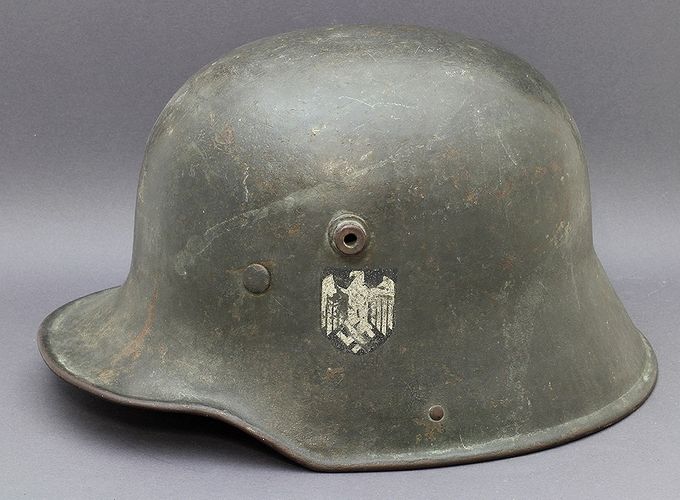 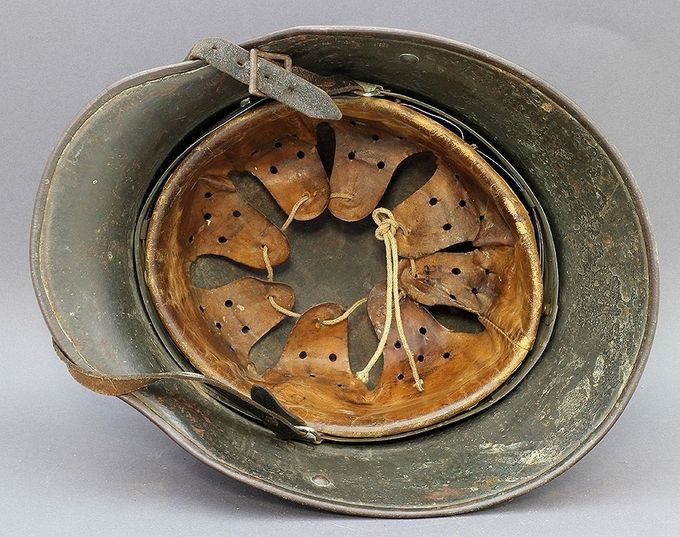 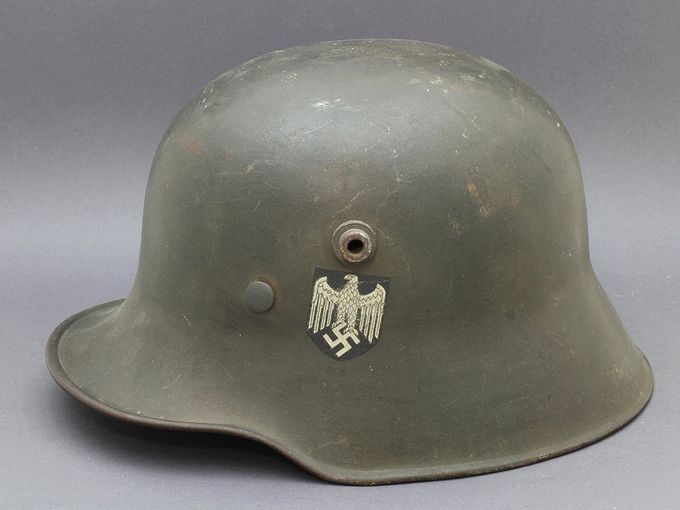 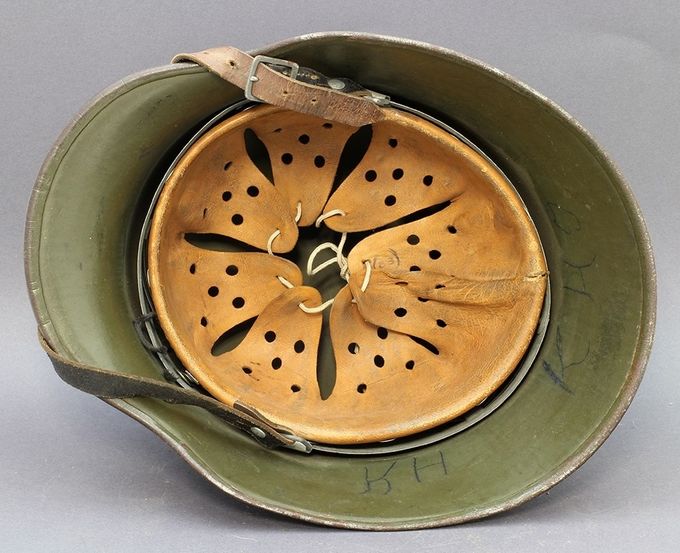 The liner of the M18 above. Notice the early factory smooth green paint. 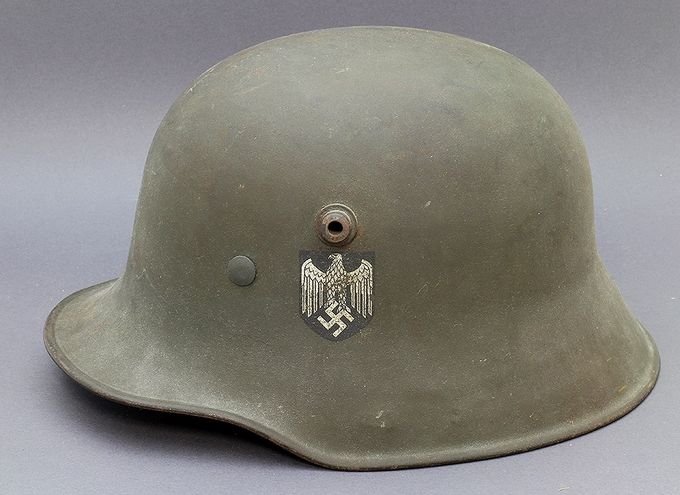 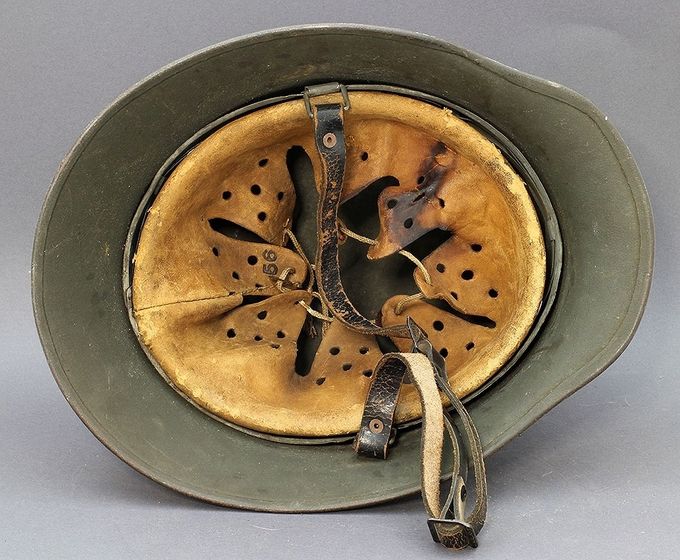 The liner of the M18 above. Notice the civil-type chinstrap. 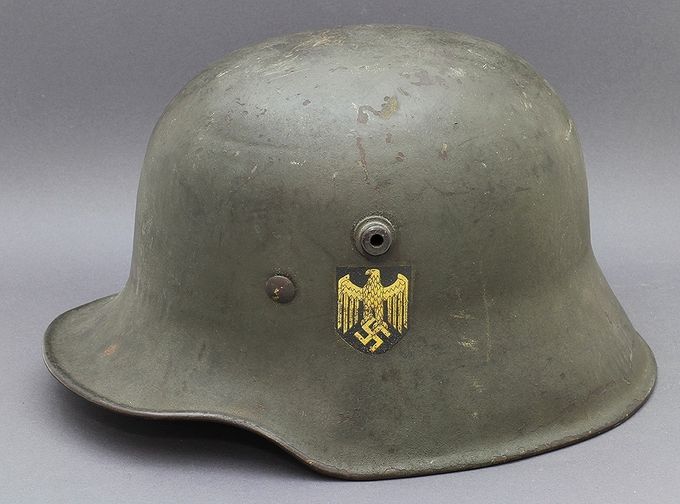 M18 BF 64 (Fulda) with gray mid-war paint and a Huber Jordan & Körner decal that has yellowed from age due to the lacquer. 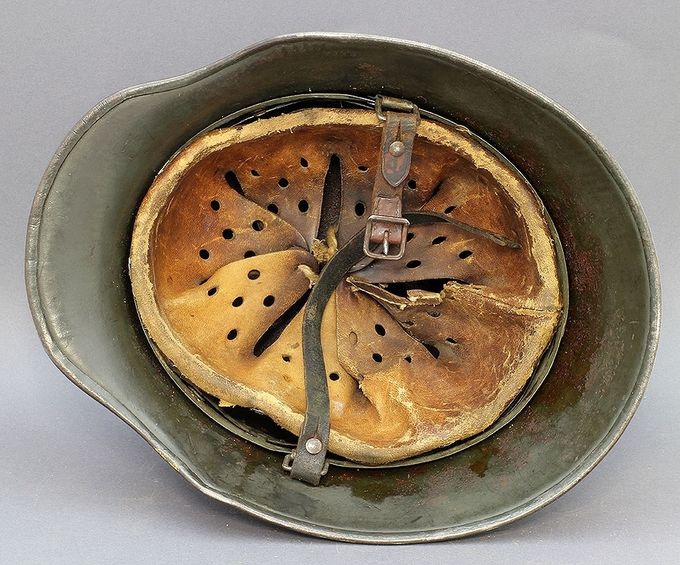 The liner of the M18 above. 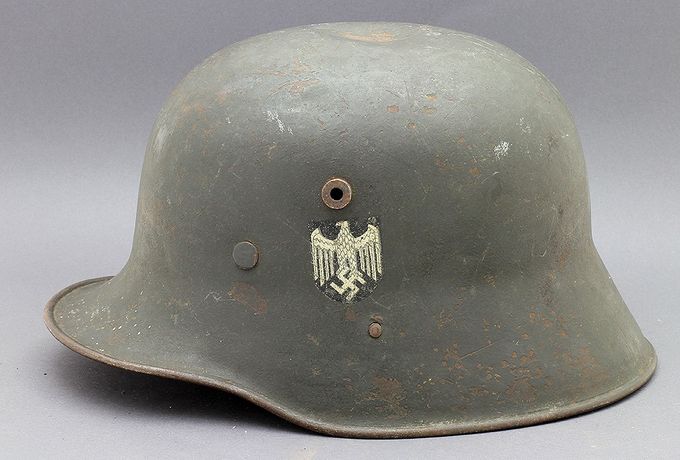 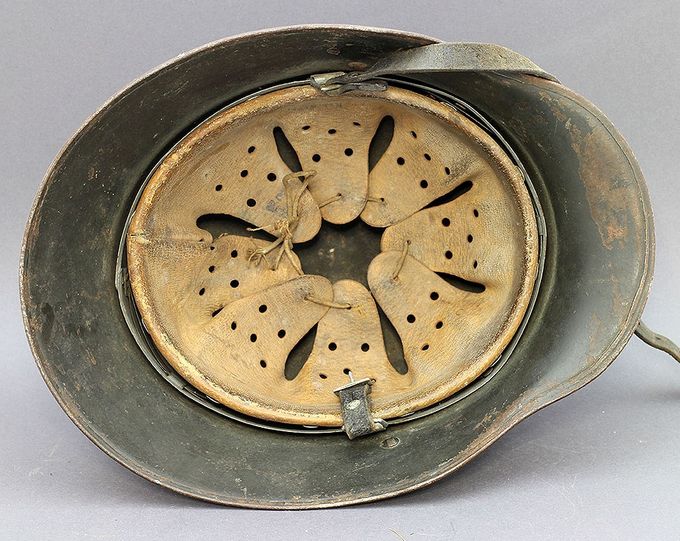 The liner of the M17 Austrian above. 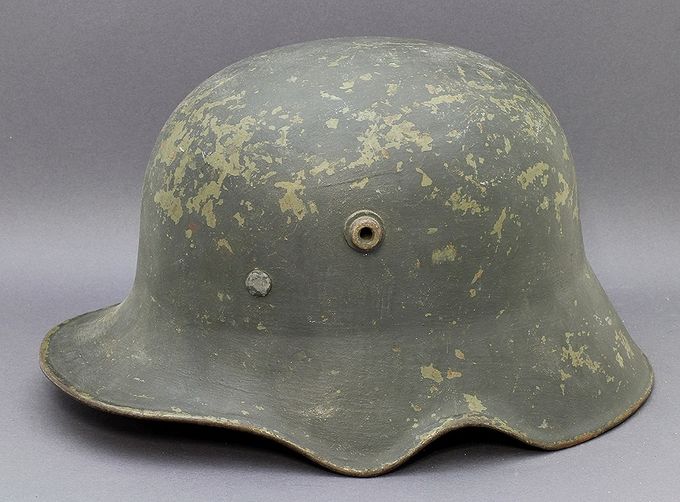 M18 ET64 ear out-cut helmet. The helmet has a Heer decal under the last layer of gray rough-textured paint. Notice the flaking of the textured paint revealing the smooth early green transitional paint underneath. 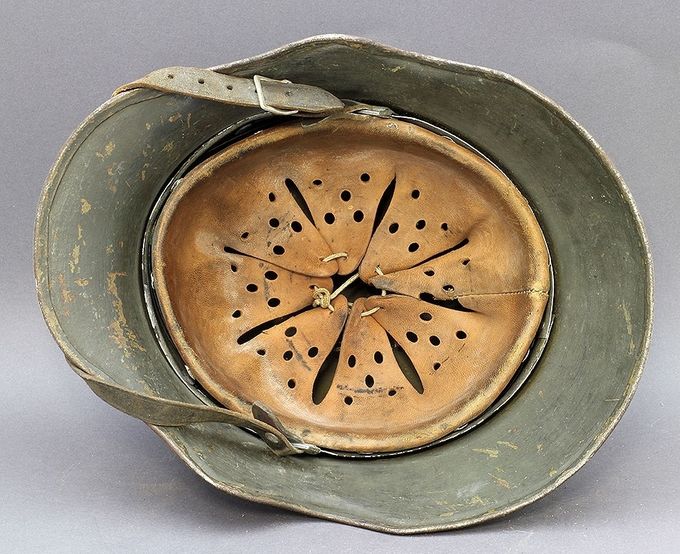 The liner of the M18 above. This M31 liner has an embossed manufacturer stamp in the leather. 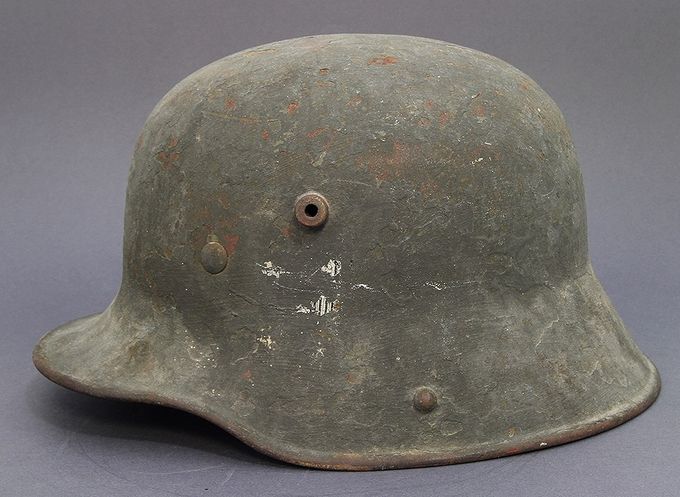 M16/M17 reissue with rough textured paint. The decal has flaked off due to poor adhesion to the rough surface. Typical light gray textured paint commonly found in Norway. 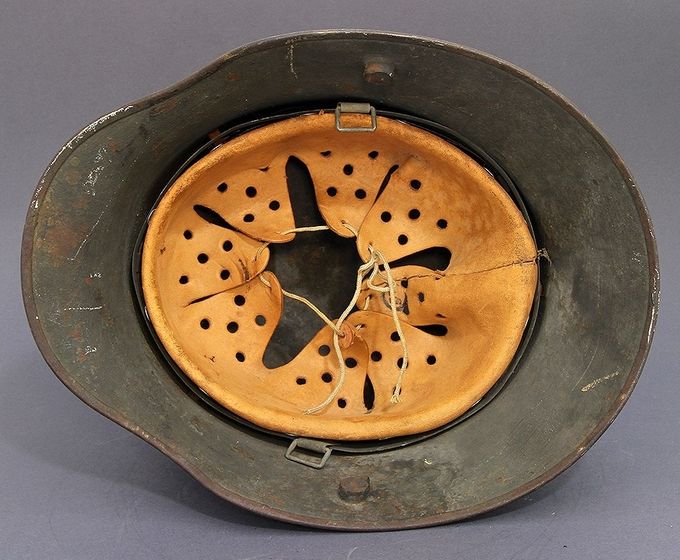 The liner of the M16/M17 above. The helmet has received the textured light gray paint in the dome as well.